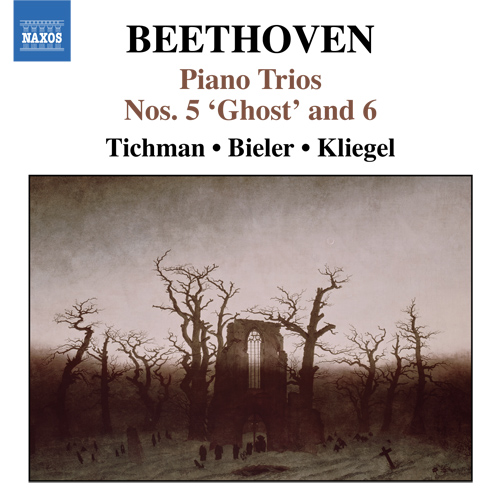 Richard A. Kaplan | Fanfare, November 2010
There are two basic ways to record the Beethoven piano trios. The first, more or less standard during much of the LP era, is to stick with the original compositions for violin, cello, and piano, published with opus numbers and numbered chronologically. There are only six such works, bearing opp. 1 (three trios), 70 (two), and 97 (one, but that one is the “Archduke”). Sometimes the so-called “Gassenhauer” (Popular Song) Trio, op. 11, is included; although composed for clarinet, cello, and piano, it is often played in its alternate version for standard piano trio. In such cases it is often designated Trio No. 4, corresponding to the order of composition; however, it can also be found listed as No. 7, since the earliest numbering systems included only the canonic six, and No. 4 was accordingly already assigned to the “Ghost” Trio, op. 70/1.

In these musicologically aware times, however, a second, more inclusive sort of compilation is becoming increasingly common. Since Beethoven wrote several single movements, sets of variations, and arrangements of others of his compositions for piano trio, at least a half-dozen additional pieces are also eligible. For some reason it has become customary to assign cardinal numbers to these works as well; ArkivMusic lists trios up through No. 12. This and other systems of numeration are purely arbitrary, however, bearing no relation to order of composition, or, more importantly, to one another, so identifying the trios in this way quickly becomes a meaningless exercise; the aforementioned Trio No. 12, for example, is a four-minute single movement composed in the early 1790s, several years before op. 1.

Then there’s the clarinet question: Many standing trios, like the Beaux Arts and Florestan, opt for maintaining consistency of personnel by playing the alternate version of op. 11; the clarinet is typically found in performances by more ad hoc groups. Which brings us to the present disc from Naxos: pianist Nina Tichman and cellist Maria Kliegel, along with violinist Ida Bieler, have already recorded three well-received volumes of Beethoven trios as the Xyrion Trio; for this disc, however—labeled “Piano Trios 4”—they choose to revert to Beethoven’s original scoring. Clarinetist Ib Hausmann is also a longtime colleague, having recorded Reger’s clarinet and piano music with Tichman some years ago for Hänssler (favorably reviewed by James H. North in Fanfare 25:5).

This collaboration is an unqualified success. Hausmann has a wellfocused, vibrant sound that enables him to stand out or to blend with the other voices as the music requires; the ensemble and intonation are flawless. The three musicians play with a unanimity of approach that emphasizes the quirky aspects of the early Beethoven style—the sudden dynamic contrasts and harmonic surprises—without ever lapsing into exaggeration or caricature.

If there was any question about the comprehensiveness of this series —and the inclusion in the previous volume of Beethoven’s trio arrangement of his Second Symphony should have settled the matter — it is put to rest with the appearance here of the rarely performed Trio, op. 38, (“No. 8,” according to Naxos). This arrangement likely represented a sort of pre-emptive strike on Beethoven’s part; the Septet, first performed in 1800, had by 1803 proved so popular that he feared losing income if someone else produced such an arrangement first. As I wrote in reviewing the version on Brilliant Classics in 32:3, the piece, which consists of six movements lasting a total of about 40 minutes, loses a good deal in the reduction; this spirited performance, in which Hausmann is called upon to do most of the heavy lifting, holds the listener’s interest much better than that of Vlad Weverbergh and his colleagues on Brilliant. I do miss the horn, though.

Production is consistent with what we have come to expect from Naxos; the recorded sound is pleasantly live, my only quibble being that the top end of the piano seems a bit thin. Collectors who have enjoyed the Xyrion Trio’s previous Beethoven discs would be depriving themselves of a musical treat, particularly in the performance of the op. 11 Trio, if they passed up this disc just because the repertoire is somewhat tangential.

Patrick Hanudel | American Record Guide, September 2010
The piano trio is a typical chamber ensemble of the romantic period, but as early as late 18th Century, a young composer named Beethoven suggested the clarinet as a worthy treble substitute for the violin. Written in 1798 for the virtuoso clarinetist Joseph Bahr, the Trio in Bflat, Op. 11, has become a common recital piece; its nickname, Gassenhauer (Popular Song), comes from the third movement, which borrows an opera aria from Joseph Weigl as the theme for a set of clever variations. But Beethoven also wrote another work for the same ensemble shortly thereafter, even if the intention was to prevent a loss of income in the days of non-existent copyright laws. In 1799, the composer premiered his Septet in Eflat major, Op. 20 to great acclaim, but its growing celebrity made him nervous; and in the years to come he made a string quintet version and one for clarinet, cello, and piano. Here the German clarinetist Ib Hausmann, the German cellist Maria Kliegel, and the American pianist Nina Tichman present these works as a pair. Hausmann has no affiliation with an ensemble or university; Kliegel and Tichman are both faculty members at the Cologne Musikhochschule.

An old saying opines that composers are the worst interpreters of their own works, but in many cases, they are the best transcribers. Opus 38 is every bit as natural and enjoyable as its parent Opus 20; and in the hands of Hausmann, Kliegel, and Tichman it comes across as a bonafide piano trio. The group plays with thorough professionalism and artistic commitment, meeting all the challenges of the arrangement with great technical assurance, wonderful phrasing, exquisite tonal beauty, and superb collaborative musicianship. They are also strikingly flexible, whether it is producing the full sound of a large romantic ensemble or invoking the delicacy and intimacy of Viennese classicism.

Originally designed for more modest forces, Opus 11 almost feels like a step back in time, but Hausmann, Kliegel, and Tichman are no less giving of their talents or ideas. They go after the fire and sentiment that lurk beneath the classical facade, and still they do not lose the young composer’s Haydnesque touch. Among the infinite recordings of the Gassenhauer this one stands out.

Mike D. Brownell | AllMusic.com, June 2010
Performing these all-too-often overlooked works is a gifted, wellchosen ensemble made up of clarinetist Ib Hausmann, cellist Maria Kliegel, and pianist Nina Tichman. The trio shares an obvious vision of these works, producing a unified, confident performance. Sound quality and balance are remarkably clear and transparent while still warm and inviting. Articulation across the ensemble is tight and precise. Tichman’s playing is especially luminous, though her sound never covers her collaborators. Going along with Naxos’ other installments of the Beethoven piano trios, this installment is appropriate for collectors and first-time listeners alike.

Giv Cornfield | The New Recordings, Cliffs Classics, May 2010
These are two of Beethoven’s most popular and melodic trios: Op. 38 is the composer’s transcription of his Septet, Op. 20. Individually, these are fine musicians, but it’s evident from the careful approach they take in the first few movements of the Septet reduction that they have not been playing as a trio for any length of time. Things improve as the music progresses, especially in the “Gassenhauer” trio, which comes off brilliantly.

David Denton | David’s Review Corner, May 2010
Those expecting to hear a trio of violin, cello and piano will be quite surprised to find the sounds of a clarinet taking part. In fact the Fourth Trio was originally intended in that format, the commonly heard violin being the usurper. It appears the theme for the third movement variations was most probably given to the composer by the clarinettist Josef Bahr, and it was for that instrument the work was written. Beethoven was not pleased when he found he had been duped. the ‘popular song’ being an aria from a comic opera. The instrumentation for the Eighth is more open to question, as it is a reworking of the Septet of 1800, and appeared in many guises as the composer tried to maximise sales of sheet music. The present version gives the performers the option of using a clarinet or violin, and certainly having the clarinet retains Beethoven’s original concept of mixing strings and woodwind, though the sound of a piano was never originally envisaged. Ib Hausmann plays with a nicely rounded tone that avoids the pungency of many of today’s leading clarinettists, and as such blends readily with his colleagues. As the name of the works imply, it is, of course, the piano that has the leading role, Nina Tichman propelling the music with an admirable urgency. The exactitude of her fingers bring a crisp and rhythmically strong account to the opening Adagio, and balances perfectly with the clarinet’s long flowing second movement melody. She is equally admirable in the Fourth trio, and sets the scene for a highly desirable release, Maria Kliegel’s cello being a largely ‘filling in’ role that is admirable taken. Very good engineering.